My heart was already full as John Piper began his message that would close the recent Together for the Gospel conference.

I prayed that God would use his message to implant a passion within our hearts that would shape our lives and ministries for the length of our days.

I was very moved by John’s faithful, careful, and precise exposition of Romans 9.
He pointed us to the infinite grace of God and to the assurance of his sovereignty and then pointed us to Paul’s agony over the lostness of his own people, his “kinsmen according to the flesh.”
Are we driven by the same agony when we see the lost around us?

I was honestly unprepared for where John would take us at the conclusion of his message.
He took us into a crowded tent where he, as a young boy, saw his own father, an evangelist, plead with sinners to come to Jesus — “Won’t you come? . . . Won’t you come?”

Time and space seemed to collapse for me as I remembered being in the same kind of meeting, hearing the same gospel pleading, many, many times as a boy.
I remember one time in particular, when as a nine-year-old boy I heard a part-time preacher who was a full-time phosphate miner preach the gospel and then plead with us to come to Christ. And I did.

When John began to sing, “Softly and Tenderly, Jesus Is Calling,” and to sweetly call a generation of young Reformed Christians to sing it with fervor and broken-hearted pleading, my heart broke.
I tasted again the sweetness of my own conversion, and I felt more at home than words can describe.

But I was also broken-hearted with a sense of loss that so many of the 8,000 young people in that great room had never seen an evangelist plead, a godly father present the gospel, a sinner called by the Holy Spirit flee to refuge in Christ.

Imagine what it was like to hear 8,000 voices, mostly young and mostly male, singing — some surely for the first time — “Come home, come home, you who are weary, come home; Earnestly, tenderly, Jesus is calling. Calling, O sinner, come home!”

I was overcome with joy and profound thankfulness for what happened in that room that Thursday afternoon.
We all got to see an evangelist pleading with sinners, pointing to Christ, unashamed to plead with emotion and passion and agonized urgency.
I heard the conviction in the voices of a rising generation as we sang that hymn, and my spirit rose within me.
I was thrilled to lose my composure for the sake of a moment of such joy.

I am thankful beyond words to know that others will hear this message. Don’t dare miss it.

Here is the moving seven-minute excerpt about his father’s evangelistic invitations of John Piper’s message at Together for the Gospel: 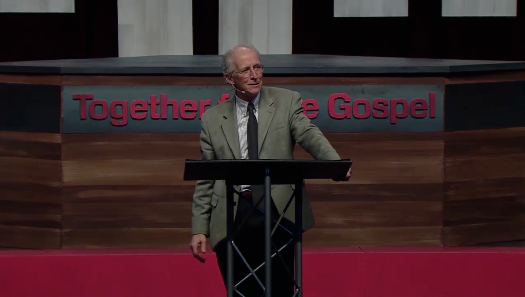